The Asia-Pacific (APAC) region has been the global leader of cumulative solar photovoltaic (PV) capacity. Therefore, solar PV plants need to be deployed rapidly in developing countries like India and Vietnam which are expected to help the APAC region maintain the dominance in the global solar PV market, says GlobalData, a leading data and analytics company.

GlobalData’s report, ‘Global Solar Photovoltaic (PV) Market, Update 2021 – Market Size, Market Share, Major Trends, and Key Country Analysis to 2030’, reveals that the cumulative capacity of APAC in the global solar PV market is expected to increase from 58.9% in 2020 to 59.8% in 2030.

China will lead the global solar PV market, followed by the US, Japan, Germany and India. By 2030, India is expected to overtake Japan and Germany to become the third largest solar PV market in terms of cumulative capacity.

Vietnam has witnessed rapid solar PV capacity additions since 2019. Attractive Feed-in Tariff (FiT) offered by the government resulted in significant interest among the domestic and global solar PV generation companies in Vietnam. Several generating companies built solar PV capacities in 2018 and commissioned them in 2019 to meet the deadline of June 2019 to be eligible for this FiT. This resulted in a massive spike in solar PV annual capacity additions in Vietnam in 2019. 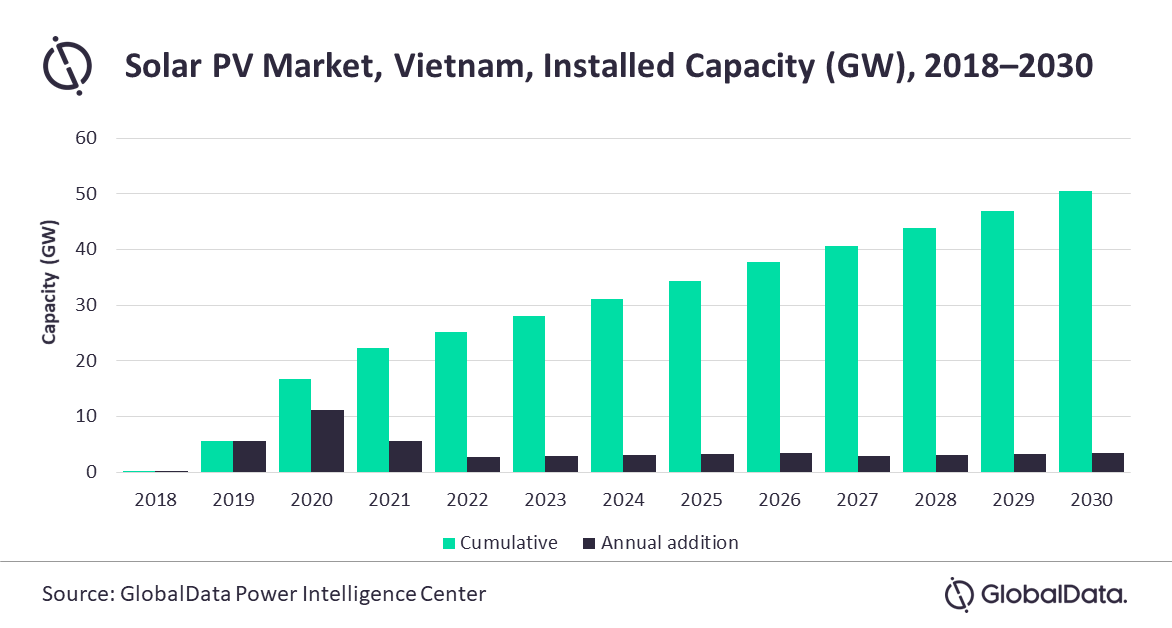 Rohit Ravetkar, Power Analyst at GlobalData, says: “The APAC has always been the global leader in terms of cumulative as well as annual solar PV capacity additions. China has maintained its dominance not only in the APAC solar PV market but also globally and a similar trend is expected to continue till 2030. In past few years, solar PV capacity additions have also increased in emerging APAC economies which include India and Vietnam.

The breakdown of components of the new target is not announced yet, but it is expected that solar PV will continue to be the largest component with a target close to 300 GW.

Mr. Ravetkar concludes: “The solar PV market in Vietnam has witnessed significant traction since 2019. An attractive FiT of $0.0935/kWh was offered by the Ministry of Industry and Trade for building solar PV capacities with a deadline of June 2019. Several utilities started building solar PV plans in 2018 and commissioned them in 2019. This is reflected in the surge in solar PV capacity addition in the country from almost none in 2017 to 100 MW in 2018 to over 5,600 MW in 2019. The government revised these FiTs after June 2019.

“However, the new FiTs were still attractive and led to a remarkable growth in capacity addition of over 11,000 MW in 2020. The government has piqued the interest of solar PV project developers through FiTs and now plans to introduce auctions to continue the growth.”