Smitarani Tripathy, Influencer Analyst at GlobalData, comments: “The influencers were impressed with Qualcomm’s move with its latest 5G chipset and 5G RAN platform for Small Cells. The influencers’ sentiment was mostly positive as they see the 5G focus getting shifted to infrastructure and also admired the new announcements as the company aims to disrupt 5G infrastructure market, which will drive ecosystem diversity.” 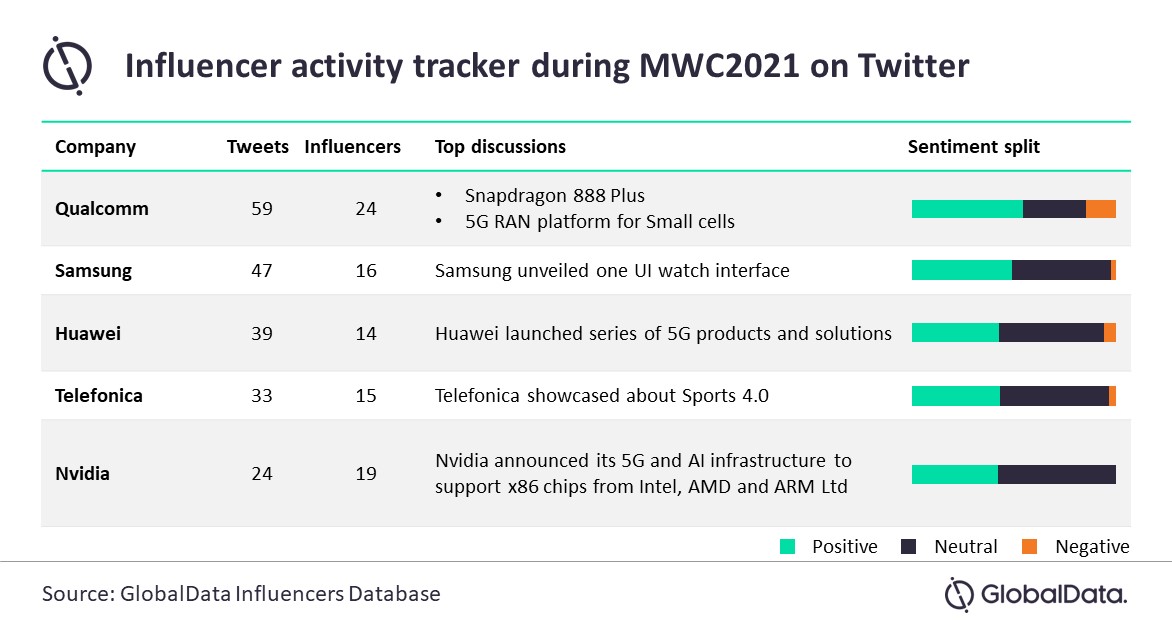 Samsung emerged as the second top mentioned company among influencer discussions during MWC21, led by introduction of its ‘One UI Watch’. The watch is built on new Wear platform, developed by both Samsung and Google. Samsung Galaxy S21 also got best Smartphone award for the last year at Global Mobile (GLOMO) Awards held during MWC21.

Huawei Technologies (Huawei), Telefonica SA (Telefonica) and Nvidia Corporation (Nvidia) were the other top three mentioned companies among influencer discussions during MWC21.  The discussions related to Huawei Technologies surged as it launched a series of 5G products and solutions for the ‘1+N’ 5G target networks that will help to expand multi-antenna technology to all bands and scenarios to build leading 5G networks. Huawei’s BladeAAU Series also won the GLOMO’Best Mobile Network Infrastructure award.

Influencer discussions on Telefonica were largely driven on the company’s exhibition on ‘Sports 4.0’, a combination of application and technologies such as 5G, artificial intelligence, edge computing and big data.