The investments in construction for the Tokyo 2020 Olympics drove the compound annual growth rate (CAGR) of 7.0% in the Leisure and Hospitality and Outdoor Leisure construction sub-sectors between 2015 and 2019. However, despite the widely held estimates anticipating that the games would generate approximately JPY10 trillion (US$90bn) of construction investment, the impact of the Olympics on the wider construction industry has been far less noticeable, says GlobalData, a leading data and analytics company.

Willis Rooney, Economist at GlobalData, comments: “The performance of the leisure and hospitality and outdoor leisure construction sub-sectors in the run up to the Olympics differed significantly from the performance of the wider industry, with real total construction output recording a CAGR of only 1.2% over the same period.  Annual real output growth in both sectors peaked in 2017, at approximately 18%, exceeding the 1.6% growth of total construction output. The relative lack of noticeable impact on wider construction output can be attributed to a number of factors, including Japan’s existing advanced public and social infrastructure, its plan to hold a ‘compact’ Olympic games and the considerable size of the Japanese construction industry.” 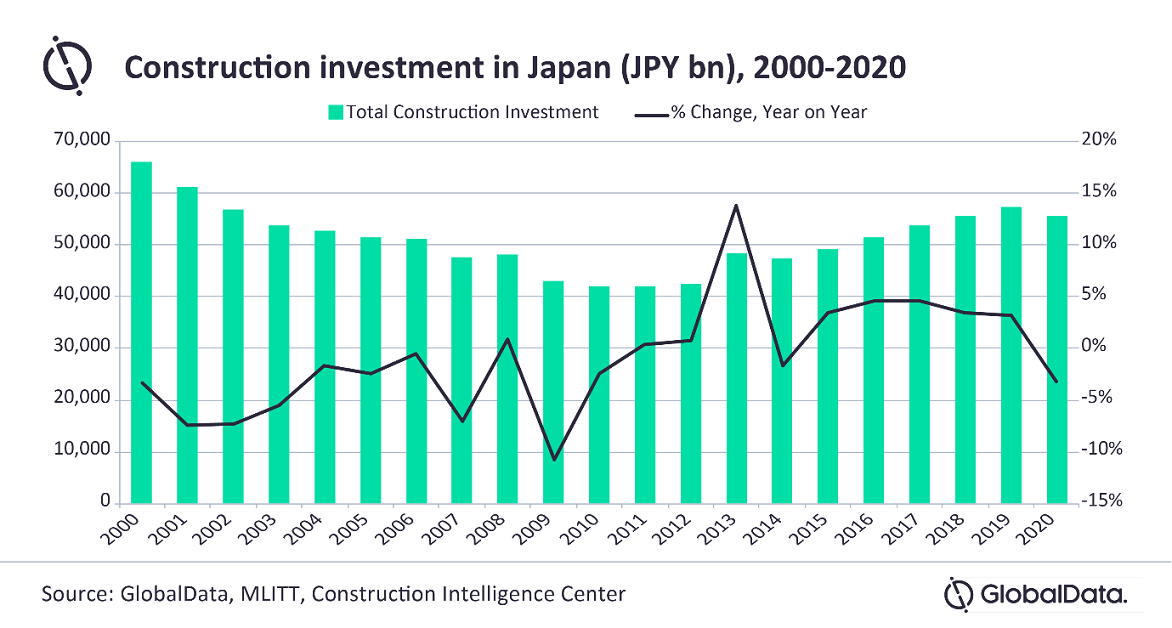 While the estimated US$90bn of investment is a substantial sum, spread over a period of six years, its impact on a construction industry which attracted an estimated average of JPY 51.8 trillion (US$464.1bn) of construction investment per annum and generated an average real annual output of US$564.9bn between 2013 and 2019, is hard to differentiate. The sharp increase in construction investment in FY2013 can be attributed mostly to the election of Shinzo Abe and a regime of aggressive monetary easing by the Bank of Japan.

Unlike when Japan hosted the 1964 Olympics, during its emergence from the post-war period, its public and social infrastructure is now significantly developed, reducing the need to replicate the substantial infrastructure expenditure that preceded the 1964 games. The decision to renovate and make use of existing venues (25 of the 43 venues at the Olympics are pre-existing facilities) and centralize events in the heart of Tokyo further reduced the need for the substantial infrastructure works that would have made a noticeable impact on industry output.

Mr Rooney concludes: “With works on the eight new permanent facilities, 10 temporary facilities and Olympic village now complete, future opportunities for the construction industry include the repurposing, maintenance and deconstruction of venues, and the construction of two 50-story apartment buildings on the Olympic village site. Repurposing Olympic stadia, which are typically created for quite narrow uses, is a necessity to avoid the white elephant (expensive & burdensome) that so often develop following the ending of the games, a scenario that Tokyo Olympic organizers have promised to prevent.”