Reliance Jio Infocomm Limited (Reliance Jio) witnessed a dramatic jump of 200% in influencer conversations on Twitter during the last week of June 2021 over the previous week, following the announcement of its most affordable android phone JioPhone Next and collaboration with Google Cloud for 5G, during its 44th annual general meeting, according to GlobalData, a leading data and analytics company.

Smartphone, 5G and Android emerged as the most mentioned trends among influencer discussions on GlobalData’s influencer activity tracker of Reliance Jio, during the last week of June. The discussions related to smartphone were led by revelation of its 4G smartphone ‘JioPhone Next’ in partnership with Google Cloud. The strategic partnership also aims to push 5G in India to digitize the nation with faster and better connectivity. 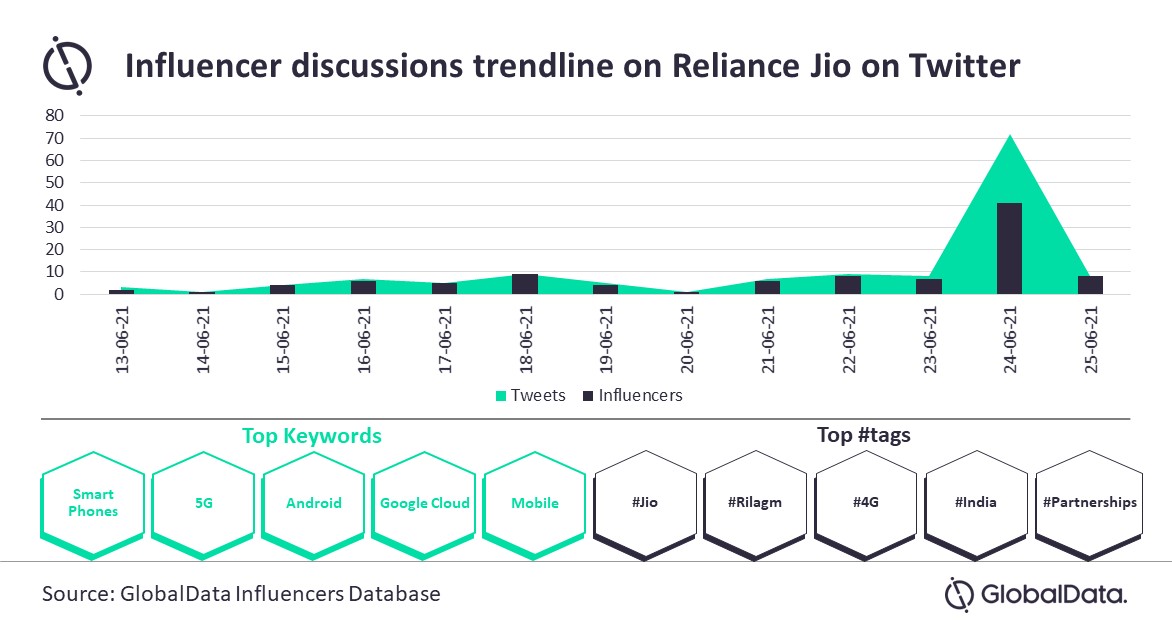 Smitarani Tripathy, Influencer Analyst at GlobalData, comments: “The influencers’ sentiments were mostly positive on the announcement of JioPhone Next. The ultra-affordability feature of the smartphone, along with 5G solution, will not only attract new potential customers for Jio but will also make the nation free from 2G network.”

Below are a few most popular Influencer tweets captured by GlobalData’s Company Influencer Platform:

Most Affordable 4G Smartphone but price not revealed yet. Any guesses on the pricing?”

“@reliancejio wont miss the Festive season and the post second wave pent-up demand this time with the JioPhone Next.

The sweet spot pricing would be sub-INR3000 & with deals (EMIs, Cashback, Exchange) it could go even lower!!”