Global interest in cryptocurrencies continues to rise as the top financial companies adopt crypto assets in shift of digital economy. Against this backdrop, influencer conversations on Twitter related to ‘Crypto’ showed a staggering year-on-year growth of 200% during H1 2021*, according to the Cards and Payments Influencer Platform of GlobalData, a leading data and analytics company.

Prashant Saxena, Influencer Expert at GlobalData, comments, “The influencers’ sentiments were mostly positive on the companies’ shift towards the acceptance of cryptocurrencies as a payment method. The move will not only boost the use of digital currencies in the day-to-day commerce but can change users’ perception of crypto currency as true currency.” 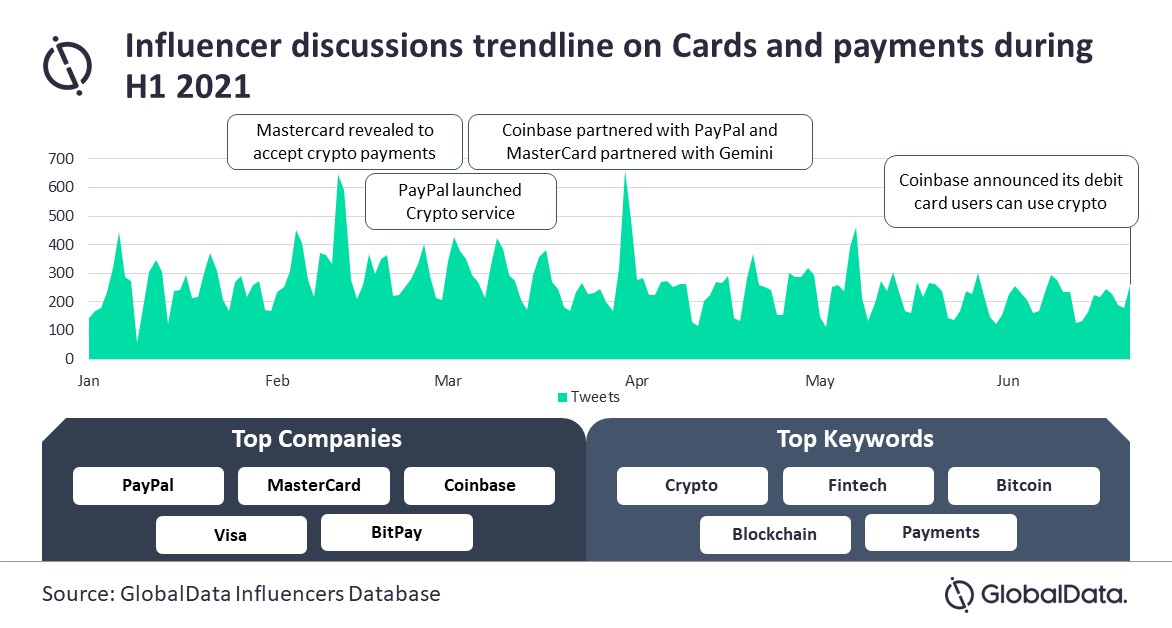 PayPal witnessed a conversation spike among influencers in March, following the announcement to accept crypto currency as a means of payment, by which the US consumers will be able to use their crypto currency holdings such as Bitcoin and Ethereum across all its 29 million online merchants globally. Another major spike was noticed in May following the announcement of US$6.03bn revenue in Q1, up by 31% year-on-year, where the acceptance of crypto platform played a key role.

Similarly, influencer conversations also surged around MasterCard in February, when the company revealed plans to accept crypto payments this year. In April, the company partnered with Gemini Trust Company, LLC (Gemini), which led to another conversation spike among influencers. The partnership between MasterCard and Gemini aims to launch crypto rewards credit card to provide a seamless way for consumers to acquire cryptocurrencies as a reward on their every purchase.

A major conversation spike was also noticed around Coinbase in April, when the company entered a partnership with PayPal to enable the US customers buy crypto via PayPal account. It was not only an expansion of Coinbase’s funding rails but also shows a major signal of crypto’s increasing mainstream acceptance. In June, Coinbase announced that its debit card holders can do retail purchase with Bitcoin, Ethereum or Dogecoin holdings, while linking it with payments apps such as Google Pay or Apple Pay.