According to GlobalData’s clinical trial database, the landscape for endometriosis has greatly diversified in recent years. The number of companies initiating trials in the space rose from only three in 2010 to 12 in 2019 – an increase of 300% over the ten-year period.

Fiona Chisholm, Pharma Analyst at GlobalData comments: “The endometriosis market is increasingly becoming more attractive to drug developers, as understanding and awareness of the disease increases. Patients are also becoming more empowered to proactively manage their menstrual health. The trend towards an increasingly diverse clinical trials landscape coincides with an explosion in the usage of ‘femtech’ products such as period-tracking apps, as well as advertising and social media campaigns aiming to de-stigmatize menstruation, such as Bodyform’s #bloodnormal campaign.” 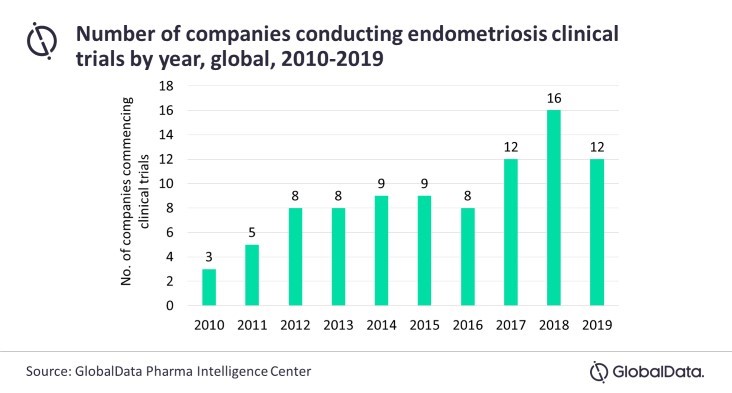 GlobalData estimates that there were over 9.5 million diagnosed prevalent cases of endometriosis among females aged 12-54 years across the 7MM* in 2020, based on primary research interviews with key opinion leaders (KOLs) and secondary research. However, diagnosis of endometriosis is challenging, and diagnostic delays are common, meaning that many more women are thought to suffer undiagnosed.

Chisholm adds: “Endometriosis can only definitively be diagnosed by laparoscopy, a minimally invasive surgical procedure. Societal normalization of endometriosis symptoms, such as painful and heavy periods, and stigma surrounding menstruation may also lead to reluctance to seek treatment and delay appropriate diagnostic tests.”

In addition, clinical unmet needs remain for safer and more efficacious therapies. Hormonal therapies, which prevent growth of endometriotic lesions, represent the mainstay of treatment. However, they are often associated with side effects. For example, gonadotropin-releasing hormone (GnRH) agonists are associated with loss of bone mineral density. Hormonal therapies are also inappropriate for women who wish to conceive due to their disruptive effects on the menstrual cycle.

Considering the high prevalence and level of unmet need, research and development (R&D) activity in this area is moderate, with 121 endometriosis trials initiated between January 2010 and December 2019, according to GlobalData’s clinical trials database**. Bayer, Ferring International and AbbVie were among the most highly active sponsors with 21, 11 and seven trials, respectively.

*The US, France, Germany, Italy, Spain, the UK and Japan

**Includes Phase I, I/II, II, II/III and III clinical trials, including ongoing, completed, terminated and withdrawn trials, and excludes clinical trials sponsored by government bodies and institutions such as universities, hospitals, and not-for-profit institutes, as reflected on the PIC on 18 March, 2021.